First stage in the creation of the Kavach

A ‘Kavach’ is in its preparatory stage only a silver or gold tablet, on which the Jyotisha Yantras of the FBs are first of all engraved, beginning the whole work during an auspiciously chosen Muhurta. Once the Jyotisha Yantras are engraved in an auspicious moment of time, synchronous with the invocation of Isvara’s grace, which is achieved through a small Hindu Pooja [worship]; the ‘Kavach’ has to be placed in an ‘environment’, which is not polluted by negative & malefic vibrations inimical to its newly-created sacred-life. The engraving is often performed by a skilled silversmith with the astrologer usually synchronously worshipping his Ishta Devata, Lord Vinayaka and/or his Spiritual Masters, for drawing the divine grace, necessary for creating the Kavachs. 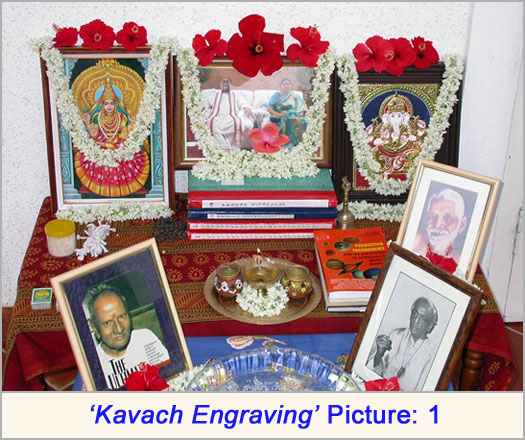 Picture [1] – Content: Prior to the actual Kavach Pooja, which constitutes the second stage in the creation of the Kavach; at the time of Kavach-engraving in the first stage, the astrologer invokes Isvara Anugraha by worshipping his Masters as God. The Mulamurti [Main Deity] in the small Pooja Mandapa above is Sri Sri Bhagavan & Sri Sri Amma. The other Masters seen are Sri. J. Krishnamurti, Sri. Ramana Maharshi & Sri. Nisargadatta Maharaj. 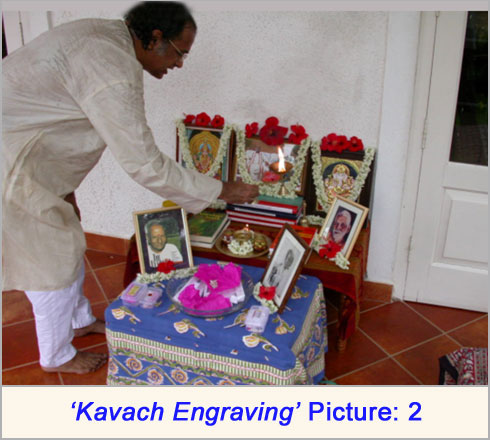 Picture [2] – Content: Kavach engraving commences exactly when the Kavach engraving Muhurta [KEM] begins. Synchronous with the commencement of the engraving, Isvara Anugraha [God’s grace] is invoked during Aarati to the astrologer’s Masters, to the goddess of learning, Sri Sarada Devi and to Lord Vignesvara, the patron God of Hindu astrology. 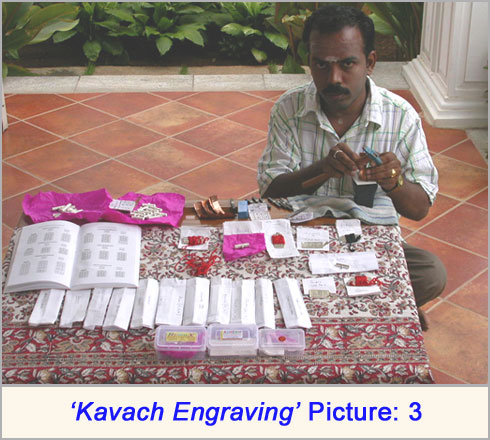 Such astrological Remedial Measures were devised by Rishis [Sages], taking fully the strong spiritual inclinations of the members of that ancient society into account. Those ancients had a ‘Divinity-centered’, as well as ‘Devatas-centered’ world-view & in such a view, the reality of Isvara as the universal spirit, & implicit faith in His healing powers, was innate for the members of that society [2, 3, 5, 7]. We moderns are not placed in the same situation, for our over-wrought reason has destroyed our sensitivity & faith in the transcendental truth of Isvara or God. Thus the question arises, whether there are any qualifying conditions, which we will have to fulfil before we may become eligible for Isvara’s grace, through the Remedial Measures?