Types & Models of the Kavachs

With the exception of the Gemini Asdt, all the Asdts have no more than a maximum of six FBs. Thus when the Kavach is made in the form of the silver tablet, on which is engraved the 6 Jyotisha Yantras corresponding to the six Navagrahas, which are the FBs, we have the ‘the fundamental model of the Kavach‘, made in the likeness of ‘the original SA model of the Kavach‘, which the founder of the SA, Prof. V.K. Choudhry created for the first time in 1994 [ 7, 12 ] and for which he accordingly holds the copyright.

Traditional Vedic astrologers usually make Kavachs for one or more Navagrahas, which they may consider to be of benefic nature & therefore important and instead of engraving the Jyotisha Yantras, they may choose to engrave the Jyotisha Mantras appropriate to each Navagraha & then seal these engraved copper strips within a silver locket. In the author’s experience, he has found the SA Muhurtas for Kavach Pooja & engraving to have a degree of perfection, in so far as their capacity to bestow an auspicious ‘destiny’ on the Kavach is concerned, which is nearly impossible to attain, if one were to adhere purely only to the classical principles of VA in the determination of these important Muhurtas.. 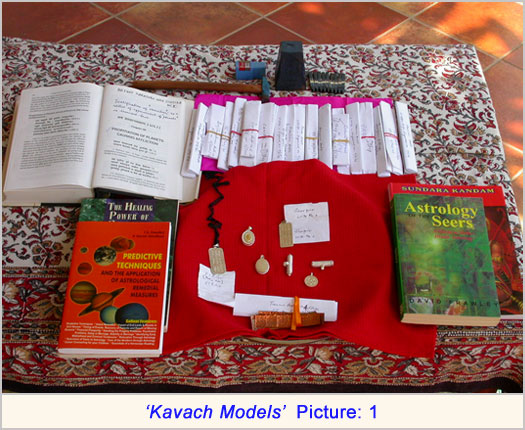 Picture [1] – Content: ‘The fundamental model of the Kavach‘, made in the likeness of ‘the original model of the Kavach‘ is seen here in the form prepared as a rectangular silver tablet by the author. The oval-shaped locket model, with the Pranava embossed & the cylindrical Lingarupa model are also seen along with copper leaves on which the Jyotisha Yantras have been engraved. 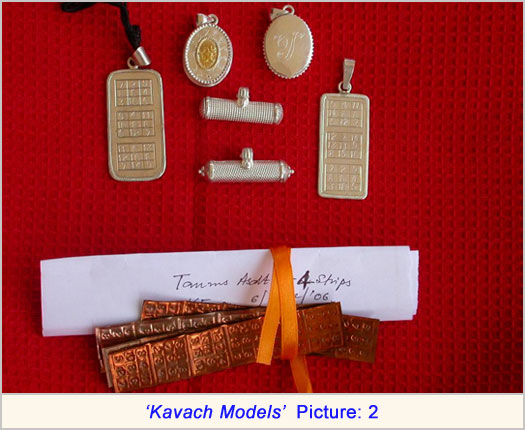 We have made two other models of the Kavachs, following the three-stage process outlined above & thereby deviating in form from the design of the ‘original SA model’ of Prof. V.K. Choudhry, but without losing the auspiciousness and the power of the Divine grace, since these excellences come from the scrupulous adherence to the Dharmic principles in the preparation of the Kavach. In these two models, whose photographs are exhibited along with those of the ‘fundamental model’, the Jyotisha Yantras which were originally engraved on copper leaves, during an auspiciously chosen Muhurta, are carefully rolled, synchronising the same with the chanting of my Masters’ Mulamantra for the invocation of Isvara’s grace, and placed compactly within a silver locket, which is eventually sealed off. This enclosing silver locket comes in two geometrical forms. 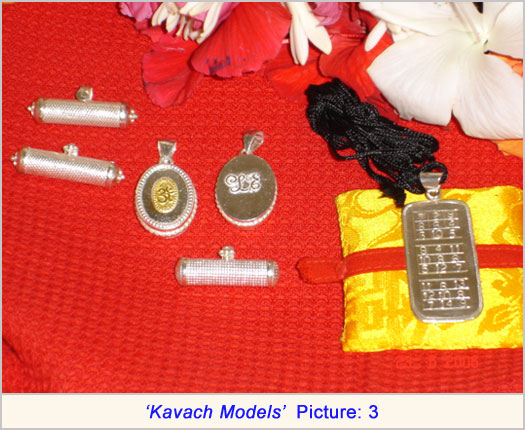 A cylindrical shaped [linga-rupa] Kavach with a floral design and an oval-shaped [locket] Kavach with an embossed Pranava at the very centre of it. As these Kavachs are sealed, their identity is kept track of, as to which Asdt they actually belong to, by embossing the leading alphabet of that Asdt at a suitable spot on the reverse side of the Kavach.