How does the Kavach Work?

The power of the Kavach – in so far as its ability to raise the energies of the Navagrahas, which are FBs in the chart of the wearer – can be traced to a confluence of at least 6 or 7 significant contributory factors. We shall consider these factors one by one.

(i) Samkalpa-Shakti of the Vedic Astrologer:

The Vedic astrologer will in all probability have a strong urge from within to help his fellow beings cope more intelligently & wisely with the onslaughts of their karmic-sufferings that are part of their ‘destiny’. Being impelled from within by such a strong humanitarian urge is one thing & being ethical according to the norms laid down in Yoga Shastra, Dharma Shastra, or in one or other of the authoritative scriptural books of Sanatana Dharma is another. When we have a Vedic astrologer, who not only has such a strong humanitarian urge welling up from within him, but who also in his day-to-day life ensures that Dharma is followed in all its aspects; then we have the Samkalpa Shakti of the Vedic astrologer shining brightly as the lamp of his ‘knowingness’ [Jnana – the Jyoti], which is the combined fruit of his devotion & surrender to his Masters or Isvara [Bhakti – the oil] on the one hand and his mature willingness to be self-sacrificing & to die to the burden of the past, on the other – in the sense in which the Master Sri J. Krishnamurti had meant this. [Tyaga – the wick]

The classical texts say that a strong Jupiter, which is the significator of all the Vidyas & Shastras, when associated with the IIH of the astrologer’s chart, either by placement or through aspect, blesses the astrologer in question, with the ‘knowingness’ & the urge to learn Vedic astrology as well as to teach the same since Jupiter is the proverbial teacher or Brihaspati in Vedic astrology. Thus, the first important contributory factor for the power of the Kavach is this Samkalpa Shakti in the astrologer’s consciousness. In placing the emphasis on a strong Ju’s influence on the IIH, we are to understand that this is also to go with additional favourable factors, such as strong Sattvic planets: Su, Ju & Mo; or a strong IXH / IVH & / or a strong Navamsa chart. Sometimes Ke’s influence on Me is also considered favourable for giving good astrological insights & perceptions.

It may not be out of place to recapitulate the significant role played by the astrologer’s consciousness in constantly being concerned about the welfare of the seekers who have turned to him for help. This is much like a mother’s ‘lamp of concern’ for her small children, which is constantly burning, quite irrespective of whatever domestic chores she may be going through in the course of the day.

(ii) Chitta-Shuddhi-Shakti [power of the ‘purity’ of consciousness] of the Wearer:

The second important contributory factor or power comes from the receiving consciousness of the wearer of the Kavach. This ‘energy-level’ of the seeker’s faith, devotion & surrender to God, as well as his attunement to the Samkalpa Shakti of the Vedic astrologer can be at one of four possible levels. ‘Purity’ of consciousness means not only being entirely free of the demons of doubt, suspicion, vacillation, wrong-understanding; but also having the essential virtues of faith, devotion and surrender to Isvara or God. The importance of such ‘purity’ can never be underestimated.

At the lowest and first energy-level, the seeker is quite casual, as he has not thus far exerted himself in any serious way to develop a deeper understanding & appreciation of the power of Vedic astrology’s Remedial Measures. Such seekers are usually strangers or ‘first-timers’, making their contact with Vedic astrology for the first-time through this Kavach, etc. Seekers at this level need not feel discouraged & disheartened, for it is perfectly possible to leave this lowest level and ascend upwards to the higher levels, as opportunities for learning more become available.

In the second-level, which is better than the first, in so far as its ability to harness Divine grace is concerned, the seeker is blessed with the ‘power of belief’ in his consciousness. Seekers at this second-level, may come from traditional families or may have friends coming from traditional families, in which case, they come to learn something about the authentic ‘success stories’, centered round the Remedial Measures. For the reason that seekers in the second level carry the blessings of the power of belief in their consciousness, they will usually receive better fruits through the practise of the Remedial Measures, since they do know something that ‘all this works and is true.’ The rationalists may belittle the ‘power of belief’, only because they have never had an opportunity to know what miracles this ‘power of belief ‘ can bring into our lives as a result of our devoted and sincere practise of these Remedial Measures.

Spiritual people like the Saints & Sages have these blessings of faith in their charts. Such seekers standing at this third-level of faith will have an innate understanding & appreciation of the benefits coming from the Remedial Measures and nobody need convince them that what the astrologers say is the truth. At this third-level of faith, the seekers have passed beyond the stage of intellectual & analytical understanding and a higher intelligence operates through their faith. Think of the heady confluence of the Samkalpa Shakti of a proficient Vedic astrologer blending with the faith of the receiving seeker, when the latter stands at level three.[See also Sec. 3 of Part VI]

Here it is very interesting for us to realize that in the Hindu conception of the cycle of Yugas, as the Yugas starting with Satya Yuga and culminating in Kali Yuga represent a gradual journey from the zenith of Dharma to the nadir of Adharma, there ought to have been a greater portion of seekers at this third level of faith in the gloriously spiritual Satya Yuga in comparison with the spiritually deteriorating Yugas which come after it. The Vedic age should have begun in the spiritually glorious Satya Yuga [Ref 6, Pg 37 & 38]

The next higher energy-level at which we may find some seekers is the fourth and this is the level at which the seekers, armed with the massive blessings of faith, have been inspired from within to undertake a deeper study of Vedic astrology, in a lesser or a greater measure. It is a joy for the astrologer to meet seekers at this level, for they understand practically every word & sutra the astrologer propounds. And in the event of seekers at this level missing a particular point the astrologer is making, they will have the courage as well as the understanding to draw out the correct answers & explanations from the astrologer.

The third contributory factor comes from the astrologer’s spiritual-purity and integrity [Chitta-Shuddhi-Shakti], which goes into the preparation of the Kavach as a sacred object.

(iii) Anugraha-Shaktis of the Kavach [Its auspicious ‘destiny’]:

It is important for us to realize that this whole procedure of preparing & sanctifying the Kavach, through this 3-stage process, not only bestows on the Kavach a highly auspicious ‘destiny’, but more importantly the seeker who wears this Kavach on a later day, becomes a participant as well as a recipient of the blessings this good ‘destiny’ of the Kavach brings into his life. Thus, a number of significant contributory factors enter into a confluence and result in the Kavach becoming a messenger of Divine grace in the life of the seeker [See the author’s pictorial representation, which follows for details]. To drive home this point from another angle, it will be now rewarding for us to look at the mechanism of the Mangala Sutra of the Hindus, which in many ways is the most important Kavach Hindu married-women wear, with a view to conserve & uphold their virtuous family life, which for householders is the essence of their Dharma. 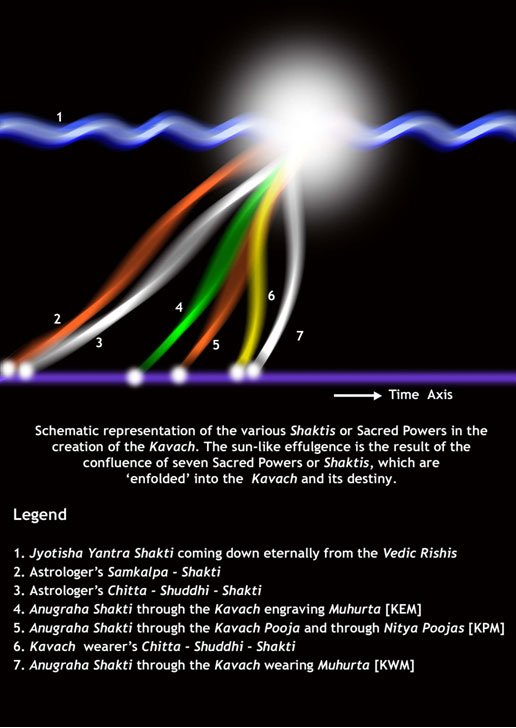